President Rajapakse’s Priority
Will the New President Focus on Reconciliation?

Reflections on President Gotabaya Rajapakse’s swearing in ceremony at Ruwanweliseya

With the election of Gotabhaya Rajapakse as the 7th president of Sri Lanka, questions about reconciliation and political settlement are being raised. Will the new president act in a manner that serves the aspirations of the majority or will he consider himself president of all Sri Lankans? The message of the new President’s swearing-in at Anuradhapura should be given serious thought here.

“Though I was aware that I could win the presidential election with only the support of the Sinhalese community, I request Tamil and Muslim communities to be a part of my victory. However, their response did not meet my expectations. As the new president, I request everyone to unite as Sri Lankans. Now, we all have the responsibility of taking the country forward as one nation”. With this statement, Rajapakse indicates his dissatisfaction with the lack of minority support. 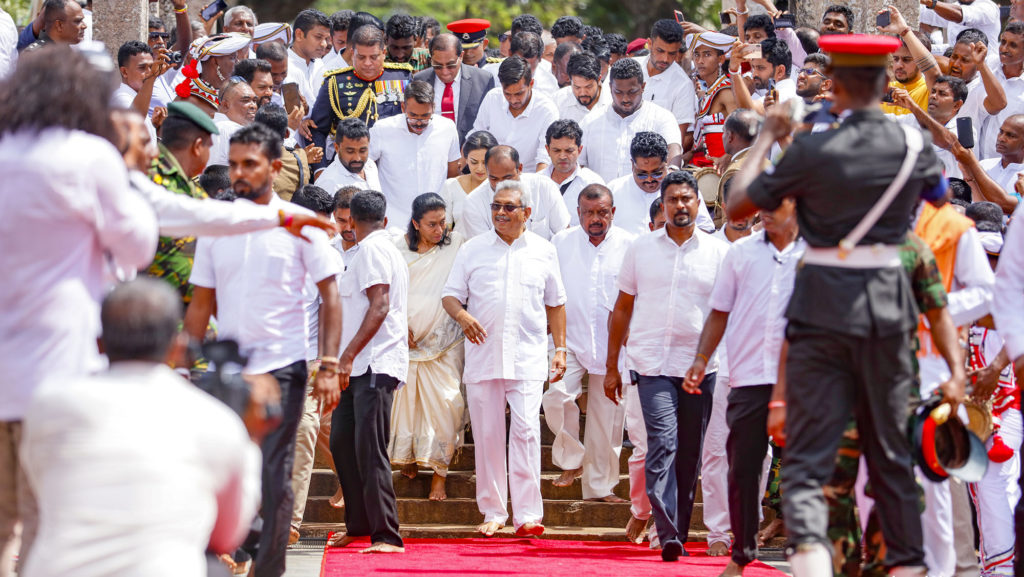 The map of the election results is similar to the map of Eelam drawn by the LTTE. It clearly indicates an ethnic divide among the people.

At the same time, about 70% of the Southern votes were for Gotabaya. This is the second election since the formation of the SLPP. The result was similar during the first the local government election in February 2018. By retaining the vote bank in the South, Rajapakse gained the support of the Sri Lanka Freedom Party in the presidential election. Moreover, after the April 21 attacks, the Sinhala people felt the need for a strong leadership. They thought that an ‘Iron Man’ such as Gotabaya would be suitable.

Gotabaya began targeting the presidency three years ago by creating organizations like ‘Viyathgama’ and ‘Eliya’ which provided access to Sinhala citizens from different levels of society. The two organizations planned ahead of the task, preparing Rajapakse for the presidential election and communicating his policies to the people early.

The Position on Reconciliation

If Gotabhaya Rajapakse became president by the Sinhala vote, the question arises as to how he would handle reconciliation efforts and finding a political solution to the ethnic conflict. This is precisely what India and the international community are observing. The mandate of the Sinhala people in the election, Gotabaya’s approach and the concerns of the Region and the West will be an influential factor in this regard.

In his election manifesto, Gotabhaya did not mention ethnic problems or reconciliation. His priorities were national security and economic development. “As President, it is my responsibility to serve all the people of the country. Therefore, I will defend the social rights of those who have voted for me and those who did not” said Rajapakse during his swearing-in in Anuradhapura.

“Those who support the new constitution as a solution to the ethnic problem are traitors. They have to be executed,” said Maj. Gen. Kamal Gunaratne, the newly appointed defense secretary a few months ago at a meeting of the ‘Viyathgama’ movement launched to bring Gotabaya to power. Gunaratne commanded the 53rd Brigade who participated in the final stages of the war at Nandikkadal. There are allegations of human rights violations and anti-humanitarian activities against the brigade which  lead to international concerns about his new appointment. The Major General is also an author of several publications including ‘War path towards the liberation of Nandikkadal’.

It is also important to note the location Rajapakse chose for his swearing-in ceremony: Ruwanvelisaya. Located in Anuradhapura and built by King Dutugemunu who was claimed to have killed Elara which ended a long war between Sinhala and Tamil factions in ancient times. As such, the location can be seen as a seat of Sinhalese victory. During his speech at Ruwanverlisaya, the new president stated that he was honoured to be sworn in at the Dutugemunu’s temple. The message it conveys is important as it could be seen as threatening to minority communities.

Given Rajapakse’s attitude and the views of those close to him, it is only natural to ask how well he will pursue reconciliation efforts and whether he will be committed to a political solution. When his brother Mahinda Rajapaksa was president, a 13th amendment was promised but not fully implemented. It is possible that the new president will have the same position.

Indian Prime Minister Narendra Modi sent a congratulatory message to Gotabhaya Rajapakse even before the results of the election were fully revealed. In his message, he invited the president elect to visit India. Modi urgently sent his foreign affairs minister Subrahmanyam Jaishankar to Colombo, to officially handover Delhi’s invitation.

Diplomatic circles say India wishes to replace China’s influence on Sri Lanka because the Rajapaksa’s are known to have close ties with China. India wants the president to understand two things: First, the relations with China must be limited to economic and financial aid. Second, it is dangerous to isolate minorities, especially Tamils, and leave their feelings unheeded. This causes potential for rebellion.

After losing the 2015 election, Mahinda Rajapakse blamed his defeat on India. The name of an Indian embassy official in Colombo was mentioned as having acted towards his defeat. It reveals that India can influence our national politics. While the Rajapaksas have an on-going relationship with China, Indian officials watch the situation closely. Therefore, the Rajapakse faction cannot disregard India’s concerns. The Geneva deadline by the UNHRC on war crimes expires in March. That too is like a knife hanging over Rajapakse’s head.

Whatever the seriousness of the issue of reconciliation and political solution, it is inevitable for Gotabhaya Rajapakse to heed India and the wider international community. In any case, we can’t expect major changes until the next parliamentary election. The powers of the President are limited by the 19th Amendment of the Constitution. General elections may be held in March or April 2020. The government formed thereafter will have to play an important role in determining the next course of action for the country. However, as a powerful president, Gotabhaya’s dexterity cannot be underestimated.

All articles on The Catamaran do not reflect the views of MiCT or its partners.