“Women must first have the economic strength to face life with determination” says Rasa Letchumi. She lives in Manchanthoduvai area in the Batticaloa district. She is known as ‘Erumbu Rasam’ (The Ant Rasam) because she is so active!

Born third in a family of 9, Rasa Letchumi’s father did not have the financial strength to care for the family. So, even free education was not available to Rasa Letchumi. Due to severe poverty, all nine have grown up deprived of several basic necessities.

At the age of 16, Rasamma went to neighboring areas and made flour, chili powder, firewood and coconut husk. She never had a decent meal or a good dress. Despite the desire to study at, the family environment did not allow for it. She worked for the entire family’s needs. Rasamma was ready, at any time, to do any work she was called to do. From the age of 16, her agility and determination were comparable to that of a worker ant.

“I have never refused to work even when I was physically unfit. I needed money to feed our family. I used to do a lot of difficult work from the age of 16,” says Rasa Letchumi, who got married when she was 26 years old. Like many women, she also thought that marriage would bring solace to life under the mantle of a husband.

“Knowing my family status, he agreed to marry me. He looked to me with love and devotion at the time. But within 3 months, I saw his true colors. He frequently quarreled with me for money. One day I was ill and he left the house instead of helping me. I collapsed. I didn’t want to live anymore. I suffered so much. Eventually I discovered that I was pregnant. I wasn’t sure if I should be happy or not. I went to the Kannaki Amman temple in Manchanthoduvai and rested under a tree and discovered the will to go on. I had to have this baby and provide the best for them.”.

To this day, she depends on no one. She faced several challenges living alone with a baby girl. Several men approached and offered her a better life. She chose to go it alone instead.

‘I was not disturbed by perverted views and actions of some men. I could not get a permanent wage because of the kind of work I do. So, I started going into the textile handloom factory,’ she said.

Rasa Letchumi, who lives in a Tamil-Muslim border village, took refuge in the Aziz Handloom factory belonging to a Muslim in Kattankudi. The factory provided her with training and employment. During the training, she learned how to weave in one month and accelerated her work to complete two sarees a day. The factory has helped ease the economic circumstances of many women in the area including Rasa Letchumi.

“Going to work with my baby was not easy. But my neighbor looked after her for me when I went to work. But she died when my daughter was 6 years old. After that I took my her with me to work. When she started going to school, I went to work only at specific times. Later, when I was having difficulty going to work, the owner of factory understood my plight fixed and fixed a handloom machine in my house so I could weave from there.. I worked 16 to 18 hours a day and was able to weave 3 sarees at a time. I worked like that from home until 2014 but I could not continue with the job. The boss, however, calls me when there is an urgent order. I can never forget his help.’ She remembers the kindness of that Muslim employer. 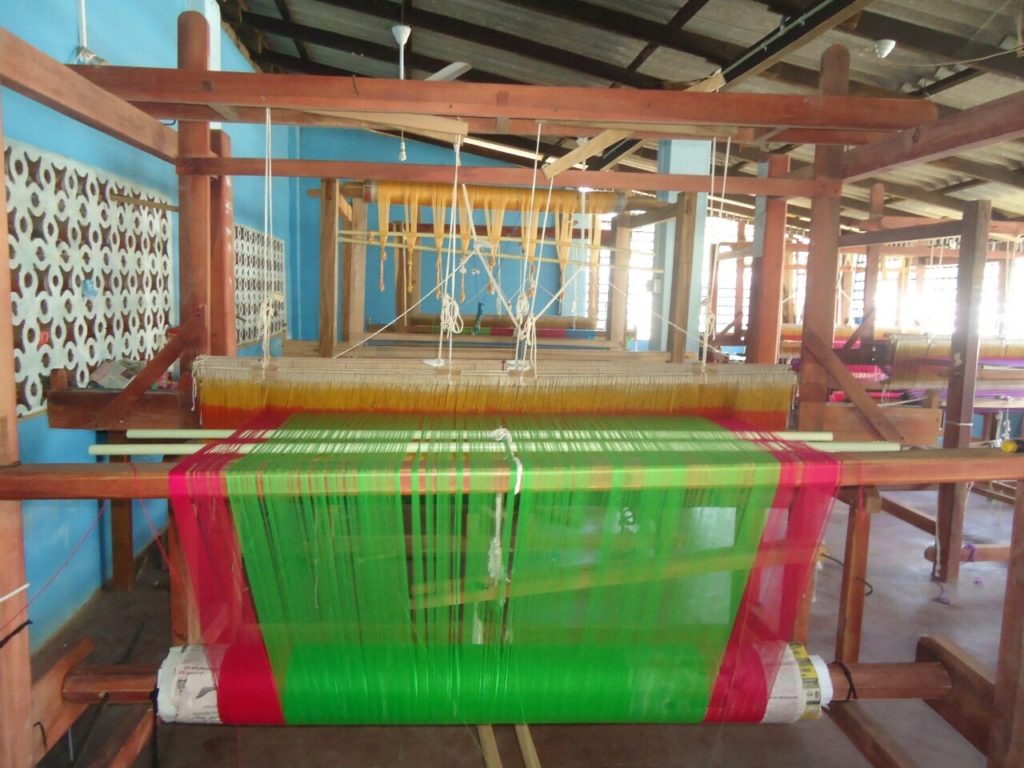 Many Tamil women work under Muslim employers. There are currently 13 workers in the Azeez Handloom factory. Six are Tamils. The owner of Aziz Handloom factory, considering the problems of his employees, set-up his factory in the area. It is noteworthy that around 5 women in Manchanthoduvai area benefit from the facilities made to them to work from home.

“With the money I saved, I built a small, one-room house,” says Rasa Letchumi, who is now 56 years old. She also maintains a small vegetable garden and sells vegetables, eggs and poultry.

Rasamma states that they earn about Rs. 700 a day. “If my daughter gets a good job in a government office, I will rest in peace,” she says with tears in his eyes.