The Dangers of Insufficient Infrastructure:
A Road Decides the Fate of the People

“A month before the baby was born, we left this place to live somewhere else. We will not return to this place for a while”’ says Sathasivam Thayaranjani who currently resides in the Lianweli Estate, about 34 Kms from Nuwara Eliya town. To reach the main road from this estate, one has to walk 3 km each way along a stretch created over a hundred years ago, paved by plantation workers during British rule.

“My sister (24) had a fever once. We had to take the road to get her to hospital by three-wheeler. She had difficulty breathing and she died before we reached the hospital. Next it was my Dad (55). He had a heart attack in 2012 and the three wheeler broke down en-route to hospital on the same road. He met with the same fate as my sister. So we had to lose the lives of our loved ones in this way. If we had a good road, we could have saved their lives,”said Maniyan Puvaneswary, a resident of the same estate.

Maniyan, Thayaranjani and other coworkers at  the same plantations all struggle with similar problems. They suffer without a proper road to move out of their homes. There are 110 plantation families in the Lianweli Estate. They are used to climbing and descending a hill by foot. For them, this is now a matter of habit. But what about the sick? What about the people who carry heavy loads? Are we to allow a road to determine the fate of these people?

There is an old saying that goes ‘Don’t live in town without a temple’, but after hearing these stories, we say ‘Don’t live in a place where there is no road.‘

The story of Ponniah Sulojini who lives here is shocking. “On March 10th last year, I walked to the hospital to have my baby while I was in labour. The baby was delivered by cesarean section. After I was discharged, we took a three-wheeler to come home. The three-wheeler fell into a pit and the whole family was thrown out. My new-born baby and I were both injured. Again, we had to walk to the hospital with our injuries to be treated. We had to continue to walk to the hospital every two days to continue treatments. All of this is due to the pathetic condition of the road. Even if we go out from here before and come after the delivery we have to take the child to the clinic every month. This is an agony we are undergoing”

“I spend a thousand rupees every month for three-wheelers. Doctors insist that I should come to the clinic every month. Those who could, will walk the distance. But how can I do it? I go only when I feel it is needed,’ says Kandasamy Saraswathy, (74)  a patient.

She continued, telling us that “about 25 children stopped schooling after grade 10-11 and others are reluctant to go to school. It is not easy for them to walk 3km crossing a mountain twice a day. The school starts at eight o’clock. To reach school on time they will have to leave home before 6 a.m.”

We also discovered that a child was deprived of a birth certificate due to the road problems. “I went into labour for my second child early, but I couldn’t go to the hospital because it was raining heavily that day. When it’s difficult to walk on this road even on a normal day, how could it be possible to walk on a rainy day? The delivery happened at home so my child was denied a birth certificate because I didn’t give birth in a hospital. Was it my fault?”, Asks Yogaraj Kalaiselvi.

There are similar stories across the estate because of the condition of the road. The estate is under the management of the Mathurata Plantation. High Forest is a small town situated close to this estate for emergencies. The High Forest Divisional Hospital is located about 6 kilometers from Lianweli Estate. If you have to travel this distance in a three-wheeler, the fee is Rs. 1,000.  If you go to the nearby Alma Greymont Estate where you can find tarred road with a Sri Lanka Transport Board bus service running at a specified time. The distance between the Lianweli and Alma Greymont estates is three kilometers. This three-kilometer road is therefore in need of urgent renovation. It will be the solution to many of the problems of the people in the area.

The town was created over a century ago and provided with electricity only in 2010. Many townsfolk have held demonstrations along the road several times demanding the renovation. But no actions were taken. One may think that walking these three kilometers is not a big issue. But that is the biggest problem. The stretch is along a highly mountainous area. If one climbs to the top (Lianweli Estate), the entire locale is visible. The estate is situated at the highest point. The vegetables produced in this garden do not fetch the price compared to vegetables at High Forest, which is located 6 km away. Buyers rarely come here because of the road condition. So, they are compelled to sell at half the price.

Their fate of these people are decided by this precarious and unsafe three kilometer road. And yet, they still keep hoping for change. 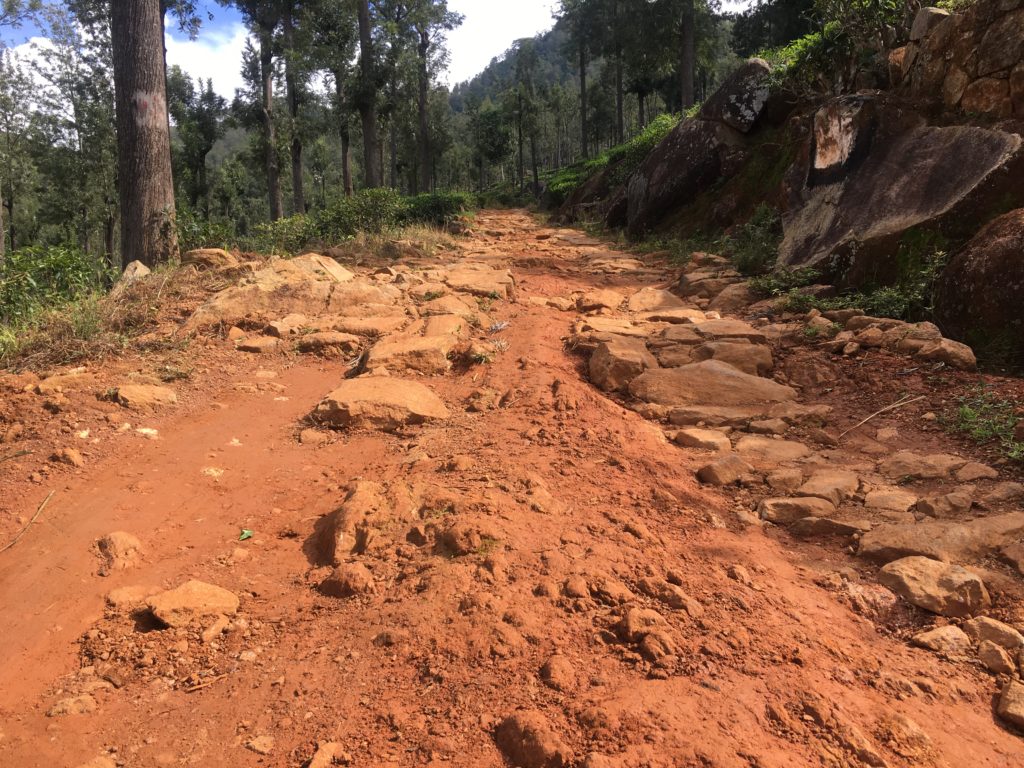