Railroading Classism in Post-Colonial Sri Lanka
A Class Above

We sat nervously huddled on the wooden bench of the Haputale Railway Station late one chilly August night, clutching our precious collections from the trip to the Hill Country – Kithul Jaggery, jars of Orange Marmalade, Guava Jelly and Nelli Syrup from the famous Adhisham Bungalow in Haputale. It was a potpourri of assortments like my island. So were my children. They had a mother with South Indian Tamil roots and a father with Sinhala and Burgher roots mixed resulting in three jars of mixed pickles. Taught from baby days to identify as simply Sri Lankans, I told them to defy anyone asking for their ethnicity. I hugged them closer, partly shivering in the cold, partly wondering how we were ever going to make the journey back home with no prior reservations! It was a long-awaited yet impulsive journey.

We had only ten minutes left. The officer at the ticket counter had already shaken his head negatively many times. Budget was tight and one more night in Haputale was not possible. We had to return home. The children had been troopers, climbing up and down mountains; trekking nearly 2kms in Indian sandals to touch the mighty Dunhinda Waterfall; had eaten vegetarian, as it was the Buddhist festivals; slept in a mud cabin in the woods with no electricity but with absolutely no fear at all. Every little insignificant experience was a thrill: the train rides through tunnels and around the mountains; the fiery short-eats and even the ghastly toilet in the train where they could see the tracks while doing their ‘little jobs’. I so desperately wanted them to love their motherland that I had grown up hating. A place where my surname once spelled death or life. I was born in the 70s.

I gathered my tea-plantation ancestry, plucked my courage, by-passed the ticket counter and walked into remnants of the British presence – the Station Master’s office. I made polite introductions in English and a tall, handsome man stood up and shook hands. The pristine white uniform was a stark contrast from the other grubby officers, evidence of colonial traits.  I began explaining our predicament. It was then that he asked the wrong question ‘Are you Tamil or Sinhala?’ ‘Oh no!’ gasped my daughter, clamping her mouth with both hands.  So I let him have it – about how our country was ruined because of questions like that and how we must teach the future generation that there are no races or classes but we were all Sri Lankans. I was livid. He sat down in astonishment. ‘There goes any chances of getting seats’ I thought to myself and left in a huff when I heard a steam engine puff. The train was already approaching.

We managed to scramble into 3rd Class. Sardine-like and marinating in the foul smells of alcohol, sweat and betel juice, I was dismayed but was determined to take it, still angry. Just then, the Station Master, uniform, cap and all, came running to our compartment and hurried us to take our bags and get off the train. The children groaned. We got off. He held up four fingers to a man at the front of the train in uniform. He beckoned us to come. My heart skipped. I thought I was in trouble for having told him off. We were like refugees now running to the front of the train with bags and jackets and Indian slippers flapping under our feet but jam jars and jaggery held tight. Passengers poked their heads out to see what was going on. It was almost filmy, me running slow motion behind a tall handsome officer in uniform, three children in tow. The Engine Driver was getting impatient. A quick exchange between the two men and we were bundled into 2nd Class Reserved compartments, reclining chairs and all. All I could do was jump back down and shake hands and thank the Station Master profusely. How did he manage to do it? As the train pulled away, he shouted ‘I did this because we are all Sri Lankans and we help each other’.

I fell back on my seat laughing. The children were giving high-fives to one other. They will never forget this experience and their belief in sympathy and kindness; in one identity and standing up for it. They also believe that officers in power can treat women with respect.

As the Knight in Shining White Armour blew the whistle, and the train pulled away from one of the most beautiful railway stations in the country, I looked forward to the lights at the start of a tunnel – the future of my children – and the love for my people that I had missed so much. 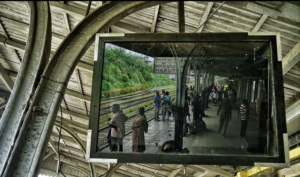