“Because I married a girl from another caste, my family was not allowed to live in the same village”

“As a result of my marrying a girl from another caste my family was not allowed to live in the same village. We had to relocate and had no contact with the village for 12 years. Now we live happily.  But they denied us our right to live in our village. That pain is always with us” said Nisanka (name changed) of Menikdivele, Kandy with a heavy heart.

Deciding one’s caste based on birth and creating disparity through this still continues in several parts of the world today. In Sri Lanka though, the caste problem does seem to be as severe as in India, it is only where marriage is concerned that the caste system crops up here. Even today, the newspaper’s matrimonial sections showcase families in search of wanting brides and grooms who belong to a specific caste to be a suitable match. With Tamils in the North, a person’s caste is determined through their answer to the question “Where are you from?” While the intermingling of people from different castes is present and has increased over time, when it comes to marriages (especially arranged marriages), caste differences exist.

There are around 1200 people living in the Menikdiwela region, 25 kilometres from Kandy, with, Sinhalese Buddhists being the majority, save for a handful of Muslims living there for business purposes.  It is the same with the Tamil community in the area.

In the heydey of the famed Dalada Maligawa, built during the reign of Kithsiri Mewan I, the king’s ministers lived in the Pilimathalawa, Penideniya, Minidivele areas and were in charge of trade and administration. Those who were learned in Buddhism and those with most power were given the title of Nilame in the Maligawa with Diyawadana Nilame being the chief, with Basnayake Nilame being second in command. Likewise there were several Nilame rankings and todate those holding the title continue to engage in the famed Esala Perahera in order of rank.

The Esala Perehera is internationally famed to be one of the finest cultural processions in the world and includes performances of various specialities including percussion and dance. Performers have continued to follow their families’ performing crafts for 4 or 5 generations now. Many towns around the Dalada Maligawa also belonged to the Dalada Maligawa, during the monarchy with administration of each area being divided between the Nilame title holders and in turn handed down to Nilame family lines for generations, similar to the perahera performers. The Menikdiwela area has thus traditionally belonged to the Devave Para Nilame line.

Menikdiwela does not have room for other castes. The people who live in the area perform various functions in the Esala Perehera of Kandy. Dancers, percussionists, drums makers, mahouts, tailors, farmers, barbers, cobblers and black smiths make up the hereditary assigned professions of the people here.  This is how the caste system came into existence, Nissanka tells us.

Nisanka, who left his village and came to Colombo because of his marriage says “We lost everything; a hundred acres of paddy land, a house, two vehicles, valuable statues and our ancestral jewelry worth over 30 sovereigns. The Nilame told us to leave the village. It was not just me, but even my parents had to leave.  At that time having lost our relatives and our rights we came to Colombo as ordinary citizens with heavy hearts” he said. An individual’s right to select a life partner of his choice is controlled by communal life.  Mostly this type of control may be found only within families.  But in Kandy the old traditions of tribal control are preserved even in the present. Here it is important to note differences in national laws along with Kandyan and Thesawalamai Law (Jaffna).

“Historically families of ancient times are awarded a ‘Sun Nasa’ certificate by the government wherein  their identities and rights are mentioned. We have lost that too. We had to even lose our tribal name” he said.  Behind the strict success of  the Dalada Maligawa exists unhappiness of the people within the system.

Some people believe that economic inequality is the reason for the caste differences and this will vanish while class inequality prevails.  But in some places in the hill country, we can note that it is not possible. In Badulla Haputale regions, even the line rooms built for estate workers were built on caste basis.

“When foreigners ruled our country they separated people according to profession. At the beginning high caste people did not visit the line houses occupied by lower caste. Similarly they were not allowed to visit  areas where high caste people lived. They were not invited to celebrate special occasions either. If they did turn up, they were seated outside the house” says the 80 year old Kanthiah Suppuluxmy who lives  there.

She also observed some leniency and flexibility in present times. Drummers have acquired the temple that belonged to the Periya Kanganey’s lineage. The work done by the Periya Kangany line for many years is now done by drummers. For the first time drummers were able to carry the pole at Ramar Bajan.  But when it comes to marriage, there is still no flexibility in the caste system.

“I was ostracized by my family because I married a boy from another caste. I chose my life and am living happily. But when my mother died I was not allowed inside the house. I was not even permitted to see my mother’s body. Ten years have passed now. That trauma is still in my mind” said Saratha (name changed) from Nuwara Eliya. The wound behind her successful marriage has still not healed. Though her relatives associate with her very well now, she is unable forget the damage done.

She too talks about the flexibility shown in temples these days. “The Periya Kankany descendants are  considered to be educated and rich. They are the one selected to work in temples. Carrying the Karagam was done only by the Kankany’s children. Others were not permitted to enter the temple.  Today everyone can enter the temple. Recently a Buddhist carried the Karagam” said Saratha who welcomes this change. She said that her anxiety now is that the future society should abolish the caste differences entirely in order to progress.

She told us about other incidents too. In one case,  someone was expelled from a political party because of their caste. Due to caste differences, two children were refused admission to the school on the Siverkandy Estate in Walapane. Later these problems were brought to the Human Rights Commission to be settled.

When many initiatives are taken to bring reconciliation between races, how can we omit caste and religious differences within each  of  the races? 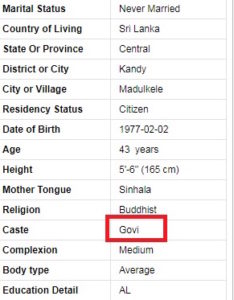 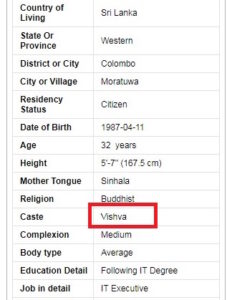