Ashraf Nagar Interview:
‘The Army Did Not Protect Us Then, Why Are They Here Now?’

Locals in Ashraf Nagar say the army is illegally occupying their land. The Catamaran spoke to the Ashraf Nagar woman who filed a court case against the soldiers.

Welcome to Ashraf Nagar, where locals say, the Sri Lankan military will harass all those who enter.

In late 2011, when many of the locals had fled to temporary housing due to an outbreak of violence, the Sri Lankan military managed to take control of the village, setting up a perimeter fence and then a base, and not allowing villagers to come in or out unless they had signed their names. The soldiers also threatened and harassed the villagers, setting curfews and playing loud music during prayers. Many of the villagers were afraid and left. However, one of the local women, Katheeja Umma, 50, has refused to go, filing a lawsuit in the Sri Lankan courts on behalf of her own family and over 60 others. Recently the case seemed to be proceeding well, when judges at Sri Lanka’s High Court ordered that the army’s “occupation” of the Ashraf Nagar land be investigated properly. The Catamaran spoke with Katheeja Umma about the case. The Catamaran:  How long have you lived in Ashraf Nagar? Katheeja Umma: We have been here since I was very young. My grandfather also lived on this land. My father had six daughters and five sons and he gave the daughters two acres as a dowry. I was married here and have had my family here; my eldest son is 33 now. However around 1983 we had to move – sometimes in with relatives and other times, into camps for the displaced – due to the fighting and threats from terrorists. From 1996 we began to move back here. Although we faced a lot of problems we tried to rehabilitate our land. We grew crops and reared livestock. We engaged in handcrafts; the women here wove a lot. Now there is nothing.  Our men can only work as labourers. 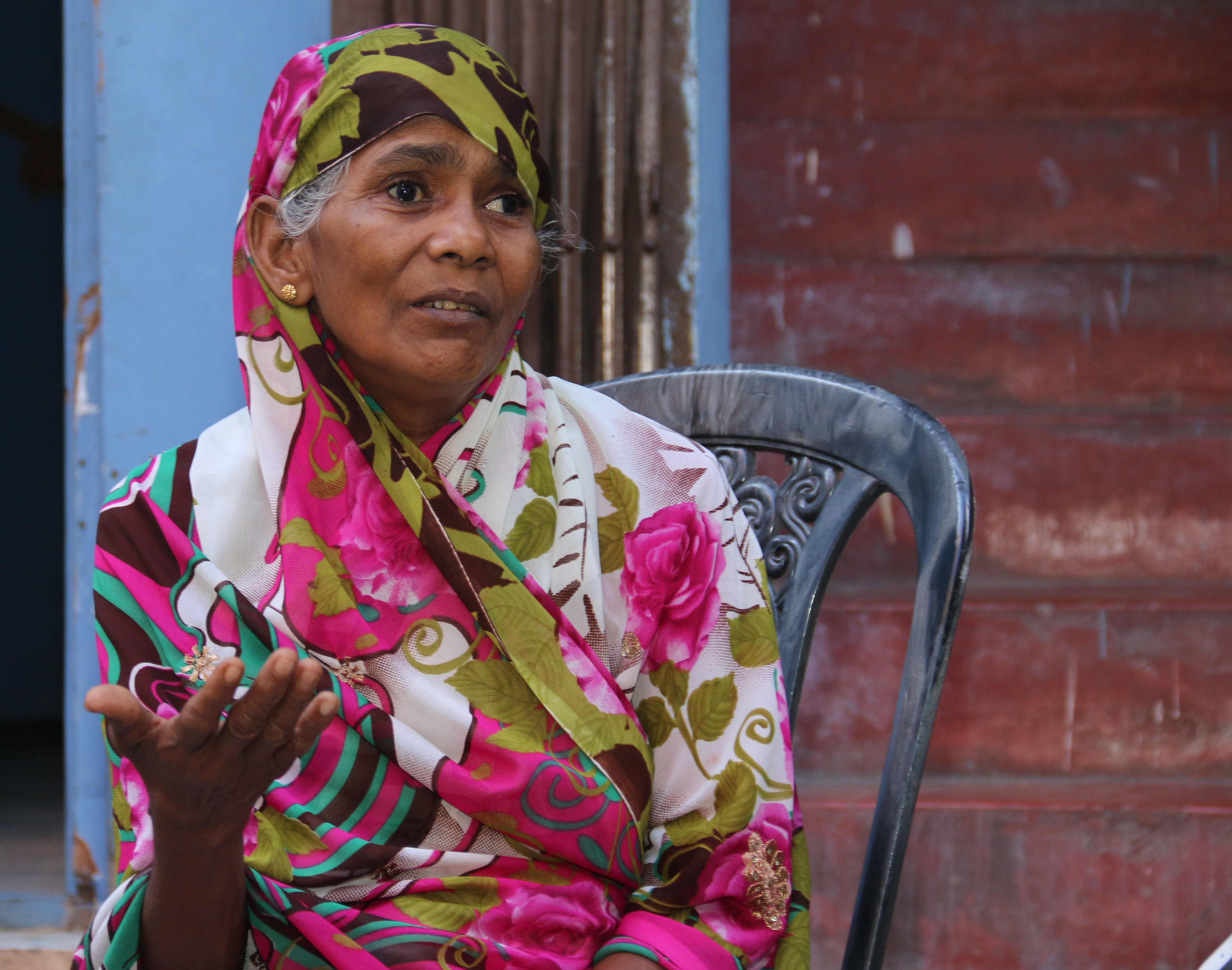 Ashraf Nagar woman, Katheeja Umma, has filed a lawsuit against what she says is an illegal occupation of her family land by the Sri Lankan army.

The Catamaran:  How did that come to be? Umma: On November 5, in 2011, officials from the Sri Lankan army and from the Department of Wildlife Conservation came here. At first they said they would just be here temporarily. They didn’t tell us to leave. But they also set up check points. We were worried about the army so we sent our young women elsewhere. Then we discovered that anyone who left the village was not allowed back in! Not unless their names were on the military’s list. Our relatives couldn’t even enter the village. We couldn’t continue with our farming because we couldn’t get any equipment into the village. Bicycles and motorcycles were not permitted to enter the village either. It’s been five years since they came. They cultivate their own crops and sell them, then feed themselves. They excavate gravel from the land and sell it by the lorryload to make more money. When there was violence here we lived through it but we had a lot of problems. The army failed to protect us at that time – so why are they coming here now, so many years later? The Catamaran: So who lives on your family’s land now? Umma: Members of the army. When they first came, there were a lot of them. Now there are only about nine or 10. They stay there, growing crops and excavating the gravel. The Sri Lankan Forest Department has also been here, surveying. They say they want to plant teak and mango trees and that they will partition the land and then parcel it out to Sinhalese Sri Lankans. We simply won’t permit that. This is our ancestral land. The Catamaran: So, where are you living now? Umma: We managed to stay in Ashraf Nagar for some time, even under military control. But then they demolished our house. So we tried to stay nearby. One night last October, around 7pm, an elephant attacked me. I thought I was going to die and in the end, I had to have32 stitches on my head. God saved me. 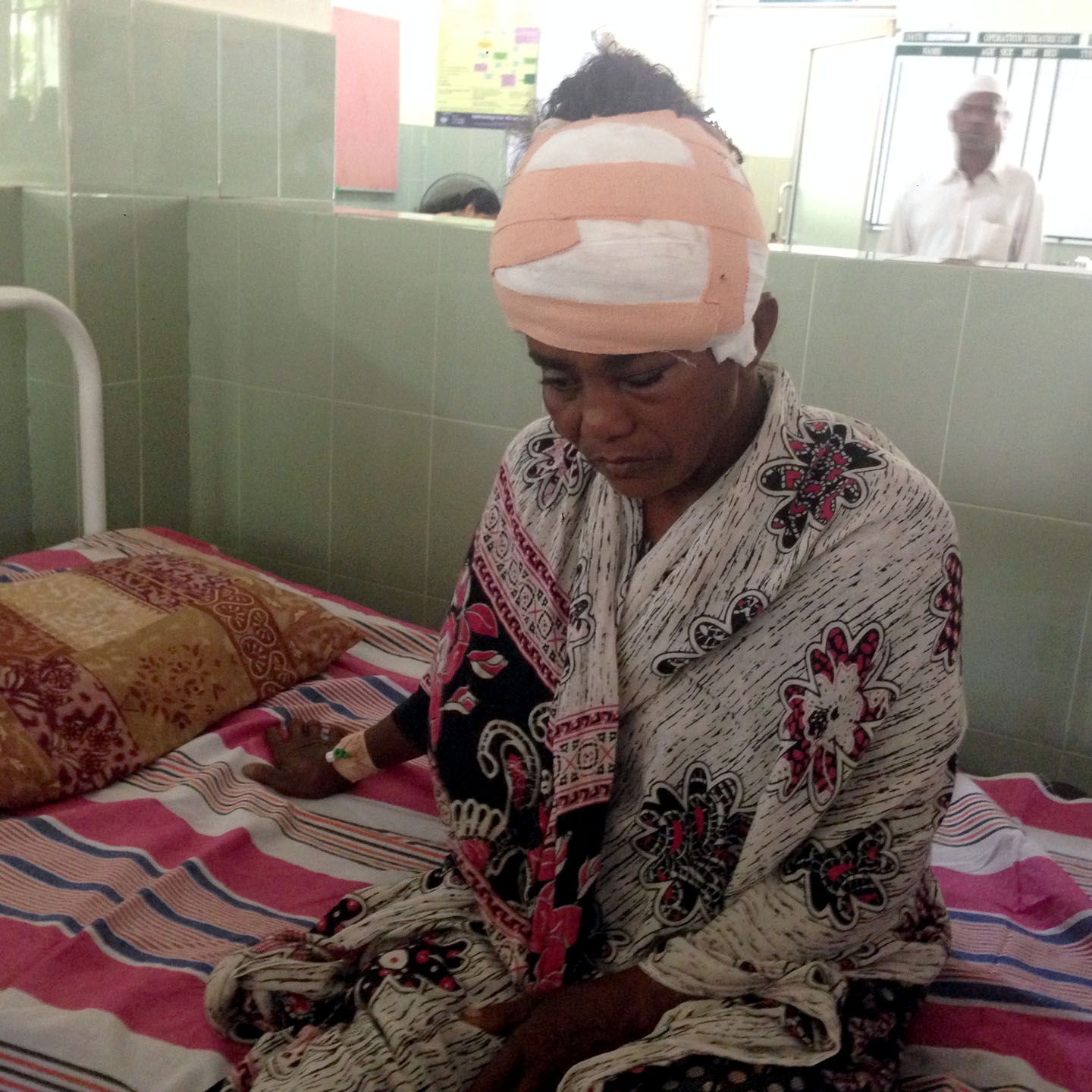 Katheeja Umma, in hopsital after an elephant attacked her.

After the elephant attack, the leaders of our mosque got together and arranged temporary accommodation for us, which is where we stay now. The Catamaran: Can you tell us a little more about the lawsuit? Umma: There are 69 families working on this together but it was myself and another person that filed the lawsuit. With the assistance of the North East Women’s Action Network, we managed to get the case heard in the High Court in Colombo. We hope that justice will be done in this case. We were offered the house in which we are living temporarily but we turned it down. We had way more land than that so we declined. We would be satisfied if the land was returned to us. We would find a way to make it work.