Nothing But Net:
A Day In The Lives Of Nachchikuda’s Fishing Families

The fishermen living around the Nachchikuda lagoon have seen their share of hard times. But now they feel the future is brighter.

The day's catch in Nachchikuda.

In northern Sri Lanka, anyone whose life is linked to the Nachchikuda lagoon is busy by sunrise. The fishermen living here go deep sea fishing every day except Fridays.

There are around 580 families who live off the fishing trade in Nachchikuda; around a quarter of them have been adjudged as living in very poor circumstances.

We live very happily now the war is over. We can live in freedom now.

On other days though, the 34-year-old, who lost a leg below the knee during shelling in 2009, in the civil war, catches nothing. “That is what the sea is like,” he muses philosophically.

But his life is full, the amputee says. He is married and he manages to save money each week for his children’s education. He bought his boat with a loan from the fisheries association but was lucky enough to be forgiven the debt. He says he even managed to buy a small TV with financial compensation from the government after the end of the civil war.

“We live very happily now the war is over,” Jesudasan says. “We can live in freedom now.” 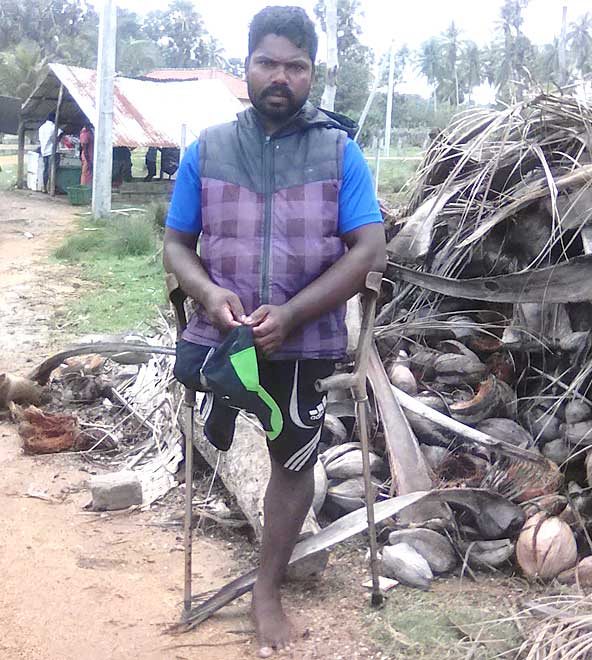 His biggest problem now, he explains, is the Indian fishing trawlers.

“We can’t keep our nets in the sea when the Indian trawlers come,” Jesudasan notes. “They cut the nets and they go. When they damage our nets we have to replace them. And for that we have to get loans.”

The Red Cross distributed fishing nets to some of the poorer families in Nachchikuda but if they are damaged these cost around SLR4,200 to replace. If the nets are not damaged, they usually last about eight months.

“Earlier we used to go to catch fish in groups,” says Jesudasan George, a local fisherman and father of seven. “We used to share nets. But now everyone has their own fishing nets so we go separately and earn a better income.”