Although they are surrounded by beautiful coastline and can go fishing for a living, potable water is in short supply for many in the Silawathura area.

The coastal belt that goes from the northern Sri Lankan town of Mannar to Puttalam, further south, attracts multitudes of tourists because of its dolphins and forests and beautiful scenery.

But the charm of the environment hides an unhealthy secret: For ordinary Sri Lankan villagers living in the Silawathura area, there is not enough potable water.

“Although the area is beautiful we do not have enough water to drink,” explains K. Juliet, 34, one of the locals living in a village in this area.

We are not dependent on the government. All we ask for is some water – why can’t they even give us that?

Over 1,000 families living in and around the fishing village of Arippu are affected, she says.

Most of the people here make a living from fishing and often, as the sun burns down at midday, you will see dozens of families sitting inside huts by the beach, with coconut leaves for a roof, cleaning their fishing nets. To refresh themselves they drink from large tin cans of water they have saved; often the water has heated in the sun. And often the water here is brackish too – that is, it is often a mixture of fresh and salty water.

“The water here is no good,” Juliet complains. “So we need to spend a lot of money to buy water every month. But even that water is often not much good because it is piped in and doesn’t come from wells.”

There used to be wells here that had freshwater but they turned brackish too as the sea water pushed inland, another villager recounts.  There had been some irrigation projects started in other places but not here. 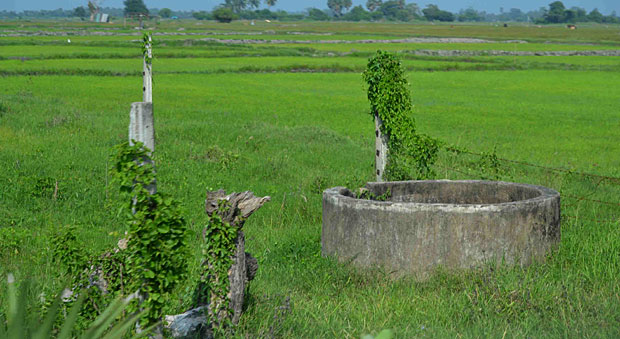 An abandoned well near Arippu

“Some say that water purification projects are given out by politicians to villages they prefer,” says K. Arohanam, a 55-year-old local. “But we have not been considered for these projects.”

“We suffered every day and we waited 30 years until the civil war had ended to return here,” says another villager, V. Seetha. “But now we must drink this hot water during the day. And then we drink brackish water and become ill.”

The secretary of the local town council, S. Sudahan, absolutely agrees that drinking water must be provided to, in his estimate, about 1,500 families in and around Arippu. He has presented a proposal to the federal government about this and is awaiting its approval. He also noted that several small water projects had been started by private and public sector organisations in some villages in the area, that pipe lines were being repaired and that essential services like hospitals were getting water brought to them by tanker.

There is a lot of kidney disease in the Silawathura area, Channa Jayasumana, a researcher in pharmacology at Rajarata University’s Faculty of Medicine, has reported. The ground water in the area is very poor, whether because it has become brackish or because different chemicals have leeched into the water supply. As has been reported elsewhere in the past, many Sri Lankans suffer from a mysterious kidney disease.

“I passed my exams, and I can earn a good living by going fishing,” Juliet argues. “Myself and other youth in this village are well educated and we are not dependent on the government. All we ask for is some water – why can’t they even give us that?”