Rags To Riches
In Mavady Manmari, The Handicapped Villager Who Found His Way

Handicapped man Thiagarajah Sothinathan has not been able to walk properly since he was a child. But that has not stopped him from becoming a hero in his own town.

Having learned to ride a bicycle, despite his inability to walk, it is common to see Sothinathan going by.

“When something happens here, he is always the first one there,” says the elderly man in the village of Mavady Manmari, about 24 kilometres from Batticaloa, one of the largest towns in Sri Lanka’s Eastern Province. “If somebody is killed by an elephant, or their house is destroyed, he travels there on his bicycle to help. When there is a funeral he supplies the chairs and the sound equipment. He won’t ask for any money for that, just accept whatever is given. If somebody’s goats or chickens get sick, they go to him for advice. Everybody likes him,” the 75-year-old explains.

“It is so strange that God has disabled such a good man,” the elderly local muses.

Many organisations provide us with assistance but not everyone seems to be able to make use of it.

He is talking about Thiagarajah Sothinathan, a local man who has lost the use of both his legs. His story is one of rags to, if not exactly riches, then certainly decent standing in his own community.

Sothinathan was born in 1990 and was brought up by his grandmother, and then his aunt. A congenital disease meant that, from a relatively early age, he was no longer able to walk. Living in poverty, he became a crippled outcast, unable to even attend school.

“Nobody liked me,” he says sadly.

The Sri Lankan civil war made life even worse for local handicapped people. Sothinathan started to move around the countryside begging. “I hated life,” the villager says.

Things took a turn for the better when he was 19 and married his wife, Vavith. The couple made their way out of economic hardship when a charity encouraged Sothinathan into self-employment by giving him a chicken and some goats, with which to start his own business.

“The 50 chicks and five goats they gave me, made me more confident,” Sothinathan explains. “From the income, I bought 20 more chickens and made money from the sale of eggs and meat. I now have 15 goats. I also garden at home and sell the produce: curry leaves, chillies, bitter gourd, maize, pumpkins and some cereals. Whatever is surplus to our own needs is sold,” says the father of two. 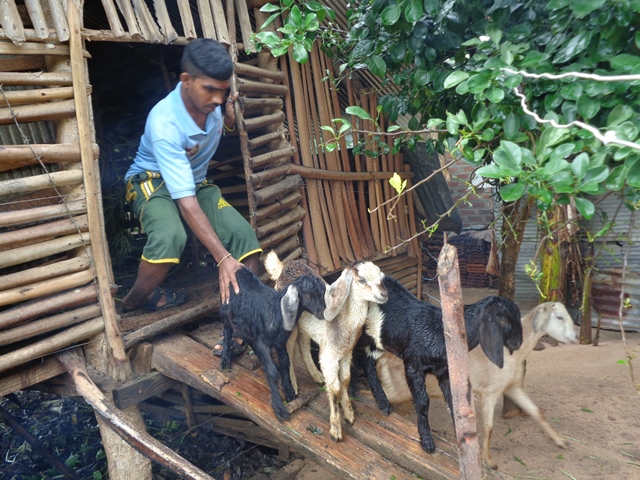 Thiagarajah Sothinathan and his goats.

Another charity donated to his cause by giving him an amplifier and he is now able to earn money by hiring this equipment out.

“Many organisations provide us with assistance but not everyone seems to be able to make use of it,” Sothinathan notes.

Having learned to ride a bicycle, despite his inability to walk, it is common to see Sothinathan going by with his sound equipment on the back of his bicycle, on his way to hire out the audio equipment to locals holding functions.

“My wife takes care of the livestock while I am out with the audio equipment,” Sothinathan explains. “I am so lucky to have a woman like her by my side. She is the one who keeps me going when I get depressed,” says the man, who now does everything by bike, including taking the children to school.