A lack of private sector opportunities and the security offered by a government job, means that unemployed youth in the north of the country are getting restless.

Rajasingham Satheepan heads an organisation that represents the unemployed graduates of the north.

The Sri Lankan unemployment rate sits at a comparatively respectable 4.6 percent. But the youth unemployment rate tends to hover at around 21 percent, with almost 30 percent of males aged between 15 and 24 unemployed and around 16 percent for females in the same age group. And many of these young unemployed Sri Lankans are in the north and the east of the country, where years of civil war saw private businesses devastated and government jobs eliminated.

There are no foreign investment or government jobs, M.L.A.M. Hizbullah, the Sri Lankan Minister for Rehabilitation and Resettlement, has stated in parliament. The least the government could do is encourage private investment or provide the local youth with loans and encourage them into self-employment.

“It is a serious problem,” Hizbullah argued. “If something is not done about it, the youths in this area will start to agitate for jobs.”

The increase in the number of young people waiting for jobs after graduating from school or university in northern Sri Lanka continues to grow. “We have been cheated by the central government,” Rajasingham Satheepan, who heads an organisation that represents the unemployed graduates of the north, told The Catamaran. “There are over 3,500 graduates who have been told continuously that they will be given a job. Now they are just on the streets.”

Satheepan says that the graduates would be willing to do any kind of job but that opportunities are few and far between, especially in the private sector. 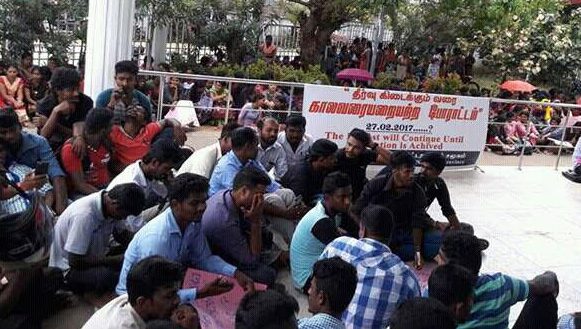 As one graduate points out, most of the private sector jobs in the north are service-oriented – banking, sales or hospitality and that’s it. There is no major manufacturing. The mother of a student adds that it is often thought to be better to wait for a government job to open up – at least that way the employee has some security and can expect a pension in the long run.

Although Satheepan concedes that the situation is also bad for graduates in the south of Sri Lanka, he believes things are particularly hard for those in the mostly-Tamil north.

“For people here, their lives have been devastated by war. They have lost everything,” he says. “A lot of people in the villages had to start their lives anew, buying everything again, down to the drinking glasses in their homes. Some are struggling to afford one square meal a day.”

“There are more graduates now than there used to be,” says Pavithra, a recent fine arts graduate, who wished to give only her first name. “These days the people who fail the admission exams, study elsewhere and graduate from external organisations. Which means there are more people looking for jobs.”

Pavithra herself says she doesn’t have much choice. “With a degree like mine, I can’t really get any work in the private sector, the best I can hope for is a teaching job,” she concludes. And that means waiting until the Sri Lankan government is ready to give her one.