Going Straight:
Sri Lanka’s Ex-Prisoners Get Another Chance Thanks To Aid Scheme

A project that funds former inmates into their own small business is finding success. One of its basic tenets is that it does not discriminate.

Several years ago, he was convicted as an accessory of the extremist organisation, the Tamil Tigers, and spent the next decade or so languishing in Bogambara Prison.

Released in mid-2016, Annalingam Nadarajasingham is now one of the beneficiaries of a special prison reform scheme, whereby ex-inmates receive money to start their own business and regain their livelihoods.

The intention of this program is for people to gain dignity and respect for what they do.

Nadarajasingham now has an envelope with SLR69,000 (around €350) with which he plans to buy a sewing machine. “I want to help my daughter open a small shop in town where she can undertake sewing,” Nadarajasingham, a local of Jaffna, says.

The scheme, which is supported by the Merrill J Fernando Charitable Foundation’s Small Entrepreneur Programme, aids 25 prisoners to start their own business.  Over the years, almost 300 former prisoners have been given this help by the scheme, which was launched in 2007.

“When I was released I had no other job,” Nadarajasingham says. “So I started selling fruits at a weekly market in Jaffna. I was selling bananas, coconuts and grapes. My son is also in the business. And I no longer sell any illegal items,” jokes Nadarajasingham, who was arrested for selling batteries that the government deemed illegal. “I learned my lesson the hard way.”

No matter where they are from, other locals look at the ex-prisoners askance. It is difficult for them to regain their good reputations but the scheme tries to help them do this.

“I was encouraged to give more support to the prisoners program,” the founder of the foundation, Merrill J. Fernando, says. “The intention of this program is for people to gain dignity and respect for what they do.”

He says he believes that everyone deserves a second chance and the opportunity to turn his or her lives around. The aid is given no matter which religious or ethnic affiliation a prisoner has.

Emil Ranjan Lamahewa, the prison commissioner for rehabilitation, says that the prisoners who receive the aid are selected through a process where their skills and financial backgrounds are taken into account.

Nadarajasingham is remorseful about his crimes. “The batteries that I tried to smuggle could have caused a disaster if they had ended up in the Tamil Tigers hands,” he says. “It was my greed that caused me to do this. We needed extra money for my family as we had so many hardships under the Tigers’ control. They imposed taxes on everything.”

However, he still refutes the other accusation that he was working for the Tamil Tigers. “I was never a person who thought that we should have a separate country for Tamils,” Nadarajasingham explains; he himself grew up in a mixed community and many of the Sinhalese children he grew up with are now part of the armed forces and police. “I want the Sinhalese and Tamils to live together in a united Sri Lanka. Fights between us are just like fights in a family that will be mended after a few days.” 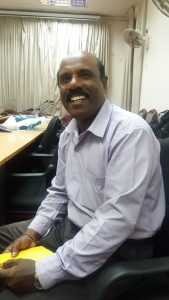