Everyone is the same when flying a kite

After being disabled in a work accident, Saman Kumara looked up at a tree and discovered a new way to make a living.

“These kites are like our lives. If we don’t balance them properly, they will sway. It is not difficult to re-balance a kite by removing a frill or two, but it is very difficult to balance people’s lives. I say this from experience. There is no racial or religious identity when trying to survive.”

Saman Kumara is known to everyone in Balangoda as ‘Kite Samantha’. The 36- year-old kite and lantern maker from Dehigasthalawa, a largely Muslim area, started off as a mason’s assistant.  After a work accident, Samantha was left disabled. He  supported his family doing odd jobs. It was when he looked up at a Bata tree that his new career came to him.

Hanging the weight of life on a kite

Samantha did not know how to make a kite or a Vesak lantern. Although he tried to learn, those who knew the art were reluctant to teach him, so he learned by observing.

“I made lanterns for some, not for money but because I was a fellow villager. But later they gave me something for my efforts. After the accident, this is the job that came to my head.”

People begin to see Vesak lanterns either by road sides or in shops one week before Vesak Day— a holiday traditionally observed by Buddhists and Hindus.

“My wife and I get ready for Vesak full moon Poya day in August, in the previous year. This is a lot of work. We search for Bata trees, cut and bring those in August.

They then have to be cleaned, cut and prepared according to the sizes. It takes some time. After that, for another couple of months the lanterns are made. Finally, those are given to shops when it is closer to Vesak. I also put up a stall with metal sheets by the side of the road and sell Vesak lanterns. We increase our income with that.” 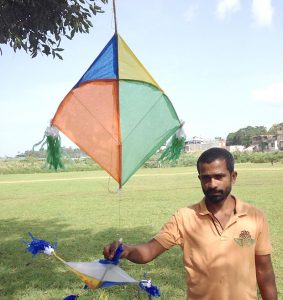 Samantha’s kite gallery is on Balangoda public ground.  Nature has offered the shade of a Nuga tree at one end of it to Samantha and his family. Branches of the tree have grown colourful with the kites that hang in its branches.

Some kites are look like snakes, some are bats, others are birds or various shapes. They range in price from one hundred to three hundred rupees. When Catamaran arrived, most of the kites had been sold.

“Kites can be made to go up two to three thousand feet. It is an art. Not everyone can do it. Look at that kite,” he says to one hovering about two thousand feet in the air.

Samantha sells kites to shops at wholesale prices. But his preference is to sell them himself from the public ground, which is located in a plane between two hills. Cold winds often blow through the area, making it a perfect place to fly kites.

“What is important is that all sort of people come here. Although Vesak lantern are bought only by the Sinhalese, Muslims also want kites. Those who buy kites have a kind heart,” says Samantha.

“Everyone is the same when they fly kites on this ground.  Everyone gets happiness from it.”