Sri Lankan couple J. Sivajini and P. Jeganathann were badly wounded after they joined the Tamil Tigers. But they are rejoining society with the fruits and vegetables they sell.

Trincomalee
Economy | Society
Share this article:
Facebook
Twitter
LinkedIn
Google+
Visit us:
Facebook
Follow us:
Twitter
Permalink:
The house among the trees in the village of Ganeshapuram, in northern Sri Lanka, is surrounded by fruits and vegetables ready for harvesting: Plantains, manioc, groundnuts and lady fingers. There is no scarcity here.

Local woman J. Sivajini moved here in 2010 with her child; her husband, P. Jeganathann, was in detention at the time due to his past membership of the militant organisation, The Liberation Tigers of Tamil Eelam, commonly known as the Tamil Tigers, but has since joined her in Ganeshapuram.

The couple, who married in 2007, are almost self-sufficient. Sivajini started this plot off, planting palms and erecting a shed with the help of her family. Now the pair cultivate their own crops and raise poultry too, enough for themselves with excess to sell. And they are in the process of building a two-room house for themselves and their seven-year-old son. None of this would be particularly unusual. But Sivajini and Jeganathan are not an ordinary couple: Both of them suffer from significant disabilities as a result of participating in Sri Lankan’s civil war.

Jeganathan joined the Tamil Tigers after his older brother was taken away by the military for questioning in 1989. Fearing for his own safety, Jeganathan saw no other option but to join the opposition militias.

“My first assignment was to the communications division,” Jeganathan recalls. “But in a fight with the Sri Lankan army in 1993 I was wounded in the eyes. One eye became totally blind.”

After this Jeganathan worked in documentation for the Tamil Tigers.

Sivajini tells a similar story. Her older sister joined the Tamil Tigers, her older brother was arrested and she too felt she must join the militia, for her own protection. 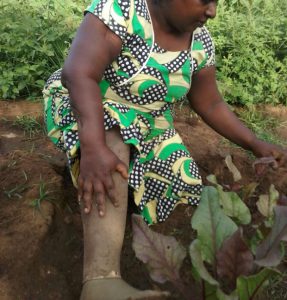 “After I joined, I had about six months training,” Sivajini explains. “I learned self-defence and how to drive and mostly my job was to keep stores, work in communications and act as a driver. But in 2001, during a military operation in Jaffna, I lost my right leg.”

Later on, another incident saw Sivajini lose function in one of her hands.

Despite their injuries, both Sivajini and Jeganathan have worked very hard to rebuild their lives – and to keep on doing so.

“It’s very hard work in the garden,” Jeganathan says. “But because of our hard work we were able to construct a lavatory this year. Next year we will build a water tank.”

Sivajini also makes art. She received training in this at an institute for the disabled. “That training gave me more self-confidence,” she notes. “It helps me deal with difficulties.”

Sivajini and Jeganathan get social welfare payments but other than that, none of the post-war relief has really reached them.

They pay a lot of attention to their gardening business though. “Marketing is a big problem,” Jeganathan says. “Some people come here and buy our eggs. But any profit on other products is negligible because of the cost of getting to and from market and the fees charged at the market. When traders come here and buy our crops then we make a profit. We work out who is buying what, and at which time, and that’s how we are planning our planting.”

Ask Jeganathan about how former fighters are supposed to be integrated back into Sri Lankan society and he is dismissive.

“For us integration begins and ends with the sale of or vegetables,” he says. “Beyond that nobody really mixes with us. Even our relatives don’t have a lot to do with us. There is still some left-over fear. We live a quiet life,” he concludes sagely. 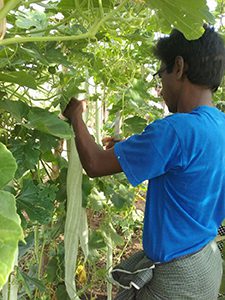