In Conversation with Dr. Ajantha Perera
Representation of Women’s Voices is an Essential Task & Responsibility

“Being a woman alone is not important. Every woman has a duty in the country and they must perform it,” 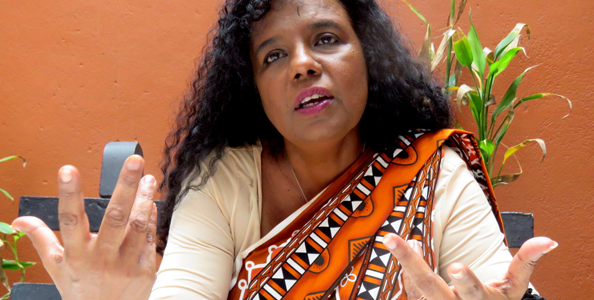 After 20 years, a woman contested the presidential elections in Sri Lanka. She was also the only woman to contest the 2019 election. Environmentalist Dr. Ajantha Perera says she came forward to seek respect for the power of women and to encourage more Sri Lankan women.

THE CATAMARAN: The presidential election is over. How do you see the result?

I am happy about my performance. I was the fourth or fifth candidate in many areas sans the north and east. People voted for me and gave everyone the message that they are hopeful about me. I am delighted and highly appreciate the response. People in areas where I did not campaign also voted me. They voted me because I am an educated woman who works for the environment. Further, they indicated that oppressed women need a voice.

People who voted for me from the Monaragala district are from poor farming families. They suffer due to water shortages and the human-elephant conflict prevalent in the area. They did not get solutions to their problems from rulers who governed the country so far. They have high hopes. My responsibility is responding to them progressively.

I am honestly happy about the result I gained as a woman who contested the election after 20 years. I understood that there are people who want the way the country moves forward to change. I think my duty is to address that hope.

THE CATAMARAN: What are your future plans with that hope?

I launched my manifesto and I hope to base my future activities on that manifesto. Accordingly, I believe my duty is to act based on my policies and to advocate for them. I will work for change according to that policy. These include providing employment for women within the country and minimizing slave-like menial jobs in foreign countries, keeping women away from their family for the sake of their children’s future, advocating for environmental concerns in development projects and strengthening relations among communities.

I was an example for women in terms of thriftiness. I spent just Rs. 2.5 million for my entire election campaign. However, I was able to get fourth and fifth places in many electorates with such a small budget. I pointed out that it is futile to spend unnecessarily. This is the first time I contested an election. The majority of the country do not know me. But I was able to come to such a place. That means, recognizing the sufferings of people is more important than money. It is important to talk to them and to understand their needs.

I hope to continue my political career in a more organized manner to make my expectations a reality. I will advocate for transparency in development programmes and hope to check on the finances, making citizens aware of the particulars of government expenditure. I will monitor the country this way and continuously appear on behalf of a correct path. We cannot allow racism and religious extremism to prevail further in this country. We must fight against the suppression of women and safeguard the rights of poor farmers. We must fight against the pro-imperialist, neoliberal economy. The participation of women in this struggle is essential.

THE CATAMARAN: How do you hope to mobilize the individual women and women’s groups that submitted proposals to you, demanded your mediation and voted to you?

That is my duty. For about 20 years, women had no courage to come forward to contest a presidential election. I hope my actions encouraged them and more women will contest in future elections. In the coming weeks, my duty and responsibility is to make women aware, train them and encourage them. I hope to conduct programmes with the participation of women who submitted proposals to me, other women’s groups and the women in the garment industry.

Being a woman alone is not important. Every woman has a duty in the country and they must perform it. The woman who rises from the grassroots level can understand the suffering of other women and is able to perform productively. They must have a clear vision of what is necessary to be done in the country. And they must be helped to this. We must start that task immediately.

THE CATAMARAN: Will your waste recycling programme end with this?

It is an essential task and will be continued. I will try to further broaden the recycling process in future. You have heard about the controversial waste management center in Aruwakkalu. I do not know what action the new President will take on this. I will meditate this problem. We have a big demand for compost. We must produce our fertilizer in Sri Lanka. We must not import compost or other fertilizer and give concessions for chemical fertilizer. We must take actions to develop agriculture in the country. I hope to discuss the issue with the Ministry and take necessary actions.

THE CATAMARAN: Please explain how your election campaign took place.

I came forward to contest because of the problems in the country and not thinking of the money I had in my hand. It is like a mother getting on board a bus without checking if she had money to pay for the ticket when she hears her child is lost. My campaigning process was also like that.

From the day I placed the deposit to contest the election and until the election day, many people requested that I resign because I had no chance to win. They advised me to try and be elected to parliament instead. Further, some people asked me not to contest and to give the opportunity to a male. One gentleman called me a day before I filed my nomination and influenced me not to hand over the nomination and give him that chance instead. He further said that he had discussed the matter with the Chairman of the Election Commission. The next day, when I went to hand over nominations, he followed me and asked me to replace my nomination with his. He told me that he could win and asked me why I was trying to achieve something I couldn’t. Many tried to discourage me in this way. I did not give in to any of them. I was also attacked via Facebook after I handed over nominations. The majority who attacked me were women. But I did not shake before such acts. I was slightly frustrated because of narrow criticism but none of them did not hinder my forward march.

THE CATAMARAN: Do you mean that political space is very difficult for women?

Although I am a strong woman, I too have to face several obstacles. My understanding is that it is very difficult for women to engage in politics here. Our society is still not sufficiently developed to the level where it can admit a woman’s strength and knowledge positively. Our society is not developed adequately to respect women. We do not have meritocracy that gives the opportunity for skilled people irrespective of gender.

I know that I have made a change by contesting the presidential election. I hope many more women will contest the next general elections and that they will secure their seats in parliament. I demand well-educated, intelligent people with a vision for the country to unite to start corruption-free politics in Sri Lanka. We do not want to see the wives, sisters and mothers of politicians coming into politics. That is what has been happening thus far.

I especially demand young women to contest the general elections if they have a vision and if they are eager in politics. Victory must not be the target. They must bring the voice of the women and represent it. I hope the upcoming general election will be a blessing for our women.