Locals in Chilaw are complaining about a garbage dump near their homes. But when the government asks them to separate waste and recycle, nobody seems willing.

The garbage dump near the waterway the local fishermen use to get out to sea.

“When we leave the house we see garbage. There are flies during the day, and mosquitos at night. All the plastic is blown from the river into the sea and it gets stuck around our propellers and damages our boats,” complains Anthonymuthu Soosaikumar, a fisherman living near the town of Chilaw in Sri Lanka’s North Western Province. “We have gone to the city council several times to complain about it but they do nothing.”

Another fisherman chimes in. “Garbage dumping has become a big problem,” adds Emmanuel Fernando Gerrard. “We come home after fishing and we cannot stay there peacefully. There is a foul smell all the time and when we have visitors, they make any excuse to leave again. And they won’t drink our water either,” he notes.

Official attempts at recycling have fallen flat because locals cannot be convinced of the need to separate their rubbish.

The fishermen’s problems all stem from one place. A piece of private property by a lagoon has been zoned as a dump by the local authorities – they travel around this area to get to the sea. And for the past five years, they say, the garbage being dumped here has not been properly managed, just left to rot.

Every now and then bulldozers come to level the piles of garbage out. “But when they do, mosquitoes and flies rise up and there is an intolerably bad smell,” says another offended local. “But other than that they don’t do anything to deal with this dump.”

It’s not like garbage disposal is an uncommon problem in Sri Lanka. There have been demonstrations about the problem. And the government has made many attempts to improve how the island nation gets rid of its waste. This has included composting and recycling schemes, which have had varying degrees of success and failure.

The most upsetting question for the fishermen and other locals in this area today is how this piece of land came to be chosen as a dumping site, as it is so near to homes and natural habitats like lakes and lagoons. 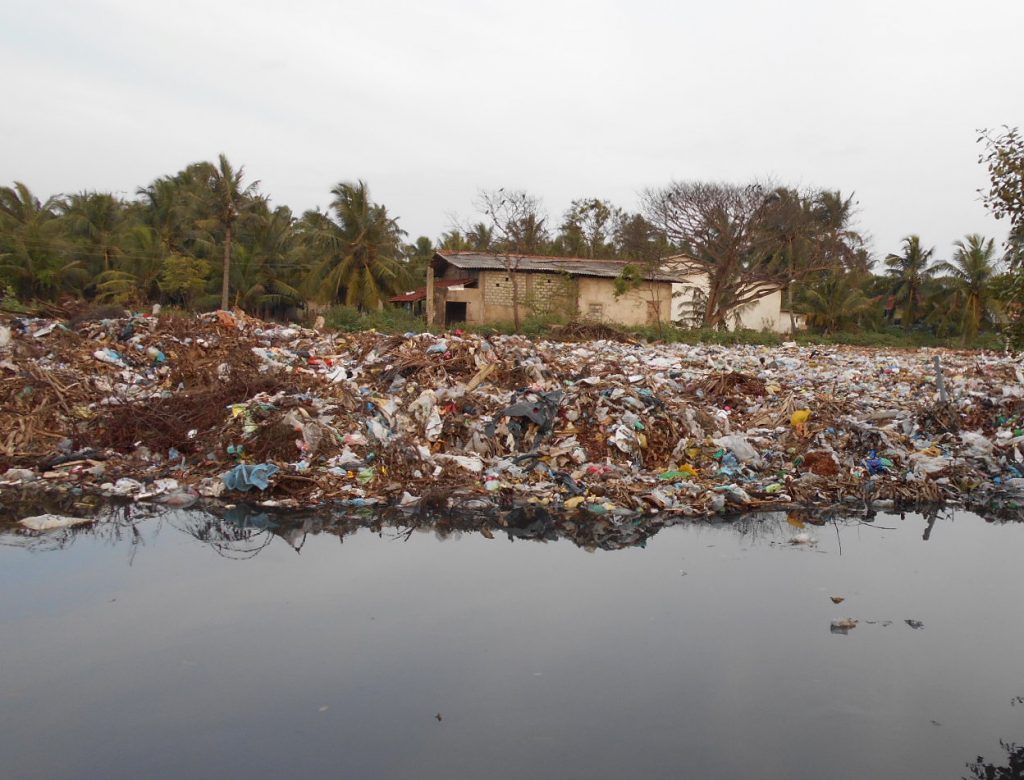 It was a last resort, says A.A. Jayasiri, the secretary of the Chilaw Urban Council. “Earlier we were able to dump garbage on land belonging to a local temple. But when the contract expired, we could not continue to do so. So we used private lands – but then the public protested and we were forced to stop using it. Following that a former council member said we could use his private land for garbage disposal – and that is why the rubbish is there.”

Jayasiri insisted that something was being done about the problem and that the council was trying to buy land in another area for a new dump. However they did not know when this might happen. Some of the local people who were protesting about the dump by the lagoon had suggested another more suitable area for rubbish disposal. But as Jayasiri pointed out, the local authorities don’t own that land and even if they did, and then they started dumping there, the locals in this area would also complain.

“Anyway,” Jayasiri added. “Garbage disposal is still a huge problem when it comes to urban areas. It is essential that the urban population cooperate with us. They should try and reduce the waste they produce and we are also making efforts to compost organic waste and to sort recyclables.”

This is another problem common to other areas of Sri Lanka as well. Official attempts at recycling have fallen flat because locals cannot be convinced of the need to separate their rubbish into organic and non-organic waste.

Meanwhile back at the lagoon, things have not improved. Several months ago, the locals even tried to set fire to the garbage dump.

“The whole village came after the fire, everything was ashes,” says one local who wanted to remain anonymous in case of repercussions. “Even journalists were there. And we thought that would make it a big issue and that somebody would come up with a solution. Instead, they said the fire was caused by a cigarette and the matter was closed.”

Reporting from Wadduwa
Pollution & the Peaceful Sea
Articles by K.Baanu