The leader of protests in Keppapulavu which saw land returned to its rightful owners, tells The Catamaran why they were so successful.

Mother of three and former teacher, Satish Kausalya, who led the successful protests.

The story of Keppapulavu village is a long and complex one. It has gone from being a strategic area during the Sri Lankan civil war to a model village – at least, partially – then to a military camp. And most recently it has been the scene of impassioned protests by local villagers.

After the Sri Lankan civil war finished, the families displaced from Keppapulavu returned home and found that they were supposed to be resettled – only not on their own lands. Instead they were given military-built housing in a so-called model village, while the Sri Lankan armed forces continued to live on the land they used to own.

Incensed, Keppapulavu locals staged many protests over the years. In 2014, a large portion of the land the military had been using was given back.

Despite the intervention of a number of senior politicians – including the country’s president Maithripala Sirisena – the protestors could not get the rest of the land back. And there were some odd events. For example, at one stage the Sri Lankan military said they would be giving land back to many of the families who were still owed it. When the families arrived to inspect the land that was being returned, the military turned them away, explaining that the land had not yet been “cleaned up”.

It was at this stage, in February this year, that the villagers started to protest. The country’s president stepped in once again and ordered the military to release the lands.

The Catamaran spoke with Satish Kausalya, a mother of three and former teacher, who resides in the model village in Keppapulavu and who led the successful protests.

The Catamaran: You have been successful in getting lands released by the armed forces and you’ve led this struggle for months. How have you managed to do this?

Satish Kausalya: This struggle was forced upon us. And we have been tricked by the army several times. One day they say we can go back to our lands and then the next day, they say: Not yet. That happened several times and in the middle of that disappointment, I became determined.

We Tamils must shed this defeatist mentality and must fight to win back our rights. I had the confidence that if we got together, then we could achieve this. 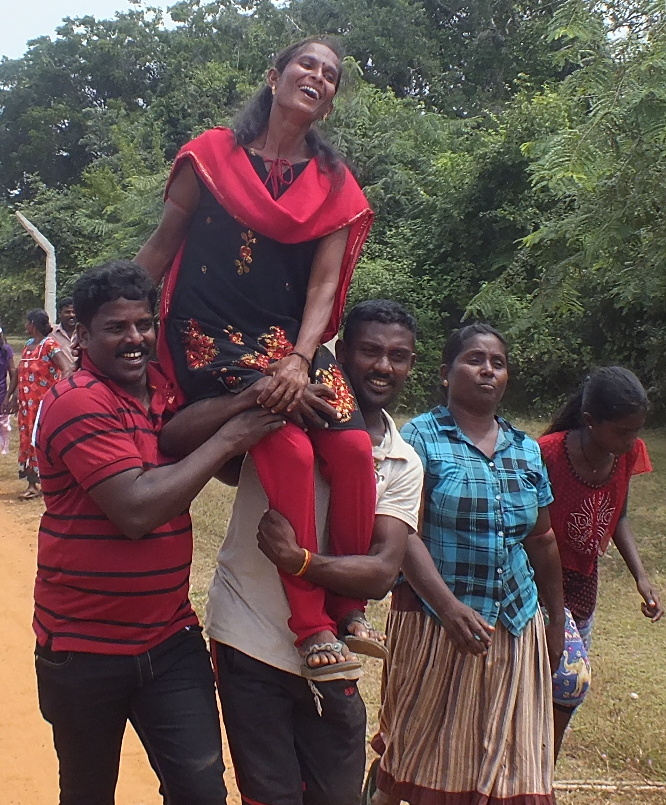 We didn’t get much support from politicians, it was really the media that gave us support. If not for the media, we would not have been able to bring our struggle to the attention of the world. Even our relatives would not have known about this.

The Catamaran: Have you experienced any particular challenges as a woman leading this movement?

Kausalya: Both sexes are equal when it comes to this. In fact at the moment, it is more difficult for men. They are questioned by the security forces just for walking down the road. So there is always a threat for them. Anyway I would always say that women can achieve anything.

The Catamaran: What advice would you give to other women, based on your experiences during this protest?

Kausalya:  No woman should ever feel isolated or submit to a situation she doesn’t want. She must be courageous, to rise up and come forward.

The Catamaran: During those 30 days, were you threatened?

Kausalya: Yes, we were threatened. Some people I knew said they would kill me. They were drunk when it happened.  The power and water was disconnected and speeding vehicles acme towards us in a  threatening manner. We were also photographed and filmed.

Ours was an all-female protest and some of the protestors were scared. I told them, we all have to die one day so let us face this challenge. I was not afraid of the intimidation. Instead, it increased my determination. We faced our challenges and we achieved our objective.

The Catamaran: It is difficult to fight against the government. However, you managed to stage a protest in front of the air force camp for the past 30 days. Where did you find the courage?

Kausalya: As Tamils we lost a lot in the war. We sacrificed so many people in the war and when we returned home, we see our lands occupied.  Even after so much sacrifice our lives remain the same. So that kind of frustration made us decide to take a risk. The struggle we decided upon was not against the armed forces or any other group. It was simply about ensuring a better life for our own people.

The people supported the cause and they stood with me. Their backing was what allowed me to get involved into this.  I was prepared to face any consequences. No bullying tactics can intimidate me.

The Catamaran: What form did that support take?

Kausalya: We received financial support and we received useful things too, like dry foods.

The Catamaran: What is your opinion about the current Sri Lankan government, and the 100 day program for “good governance”?

Kausalya: President Maithripala Sirisena came to power on those promises of good governance. But he has not been able to help us with our hardship during those 30 days. We protested for those 30 days, without basic facilities, braving the weather. It was only after our lands were released that we realized that the people in the government had not let the president know about our problems. We believe that if the president had known about what was going on here, he would have done something.

There are many similar protests going on around Sri Lankan still. And many issues remain unresolved. We shouldn’t forget that it is this government that is overseeing lands being given back to their owners. So I would say that this is a good government.

The Catamaran: You seem to be saying that some politicians failed you. What message do you want to give them?

Kausalya:  I have nothing to say on that. Some of them helped in any way they could and spoke to relevant parties on our behalf. We did not differentiate the people from the politicians in our protests.

The Catamaran: Both Sinhala and Muslim people supported your protests.

Kausalya: Through the media we asked that everyone come and support us – no matter, if they were Muslim, Sinhalese or Tamil. They brought us food during our protest and they participated too. Some of them took us to the air force camp and shouted slogans on our behalf, in language the forces could understand. It was a protest that brought together all of the communities. 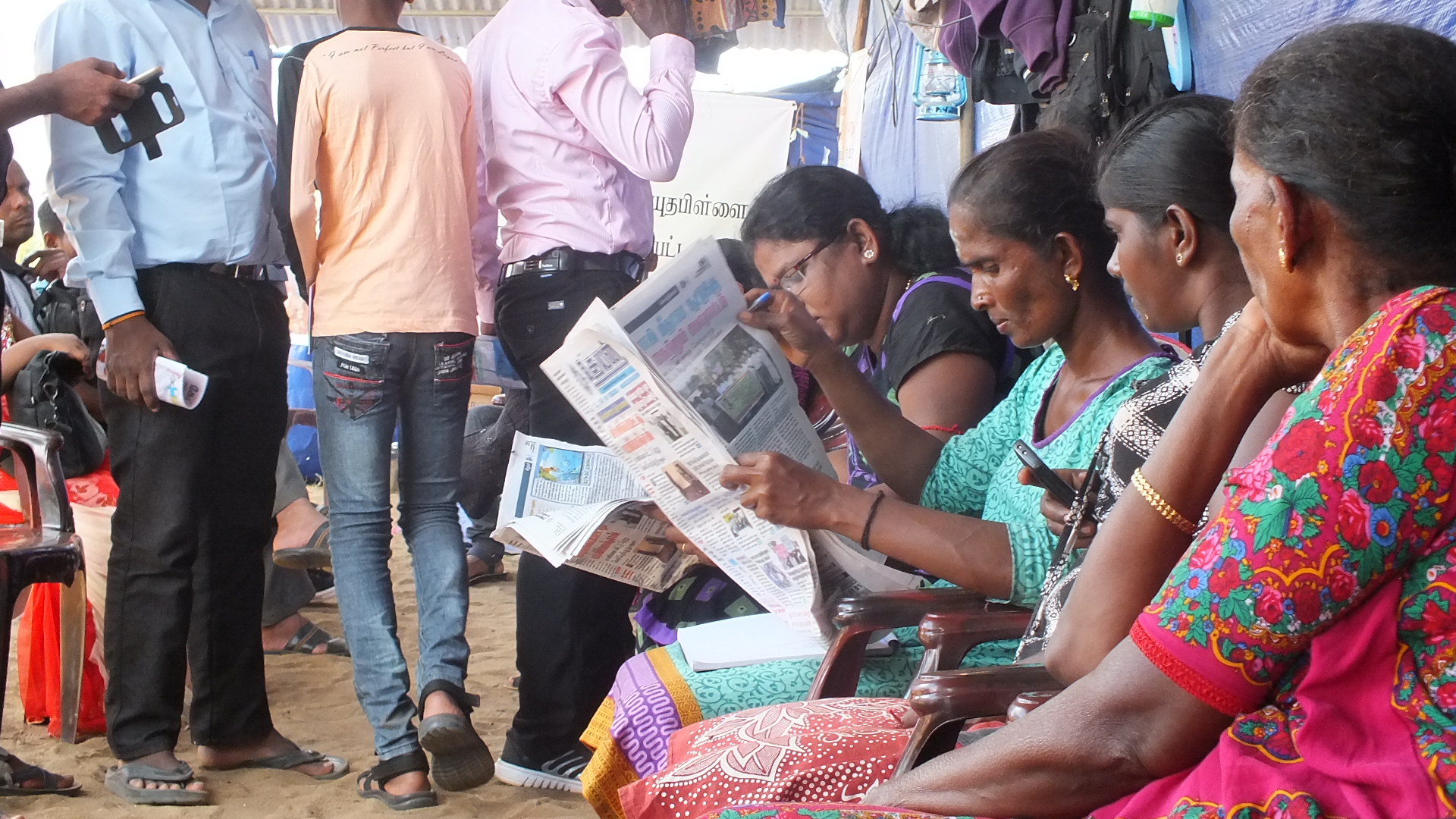 Reporting from Wadduwa
Pollution & the Peaceful Sea
Articles by Indrani