When they returned to their homes after the war, most had nothing but the clothes on their backs.

At Puliyadi junction, close to the Mullaitivu township, the junction where Mankulam-Mullaitivu road and Puliyankulam roads cross, stands a centuries old, giant tamarind tree (Puli in Tamil) – baptising the junction with its name.

“If ever she could ever speak,” said an inhabitant about the tree, “she would relate all she witnessed.”

The original infrastructure was devastated with the end of the war and now there are neat roads, modern buildings, and numerous attempts of men and women to make a living in this semi urban area built just eight years ago.

“It all started with just two kilos of plain flour,” said Ilankumaran Selvamalar from Pudukuduyirippu standing in front of her factory Abhish Manufacturers.

Today her manufacturing plant produces 13 different sweet and savoury delicacies typical to the North to a market with a constantly rising demand. Vade (fried dhal patties) typical to Point Pedro area, fried tapioca and savoury mixtures are among the most popular. Today Selvamalar has provided employment to 13 people with her business. She has put up her own factory outlet in Vishvamadu area. Today she supervises every step from production to distribution.

“First I tried pakoda (fried onion snack).  I introduced them to several shops that would buy them and as sales got better shop owners wanted different varieties of savoury treats as well. Those became popular too,” she said. Today she owns a vehicle and her son takes care of the distribution.

She started her business with from a loan she obtained from a micro financing institute. She did not receive any assistance from the government. “This land was all that was left when I returned home after being displaced during the war. I constructed a tin shed and started my business,” explained Selvamalar.

All of her employees are women who have suffered during the war. She plans to expand the business within the next two to three months and provide employment for 15 more persons. “All the new recruits will be women,” she said with pride.

In a recent women’s day award ceremony she was honoured with the first place at the district level and second place at the provincial level. 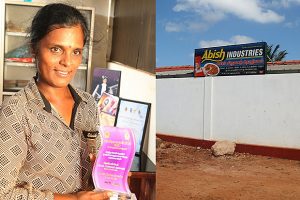 Along a rural street in Mulliyaweli, there is a newly built house decorated with traditional Northern architecture, where Rajendran Gajendrani and her husband W. Rajendran live with their two sons. They moved to Mulliyawelli in 2002 from Trincomalee and their house was built with the support of an international funding organization. The family income is generated through farming and animal husbandry.

In December 2008, at the height of the war, the family fled with the few belongings they managed to carry and for a full six months they encountered the bitter life of being internally displaced and ended up at the Ananda Commaraswamy welfare camp. They returned to their home in May, 2010.

“There were 148 families living in this village. We were the first to return. Everything was destroyed when we returned – the house, furniture, utensils nothing was left,” remembers Rajendran Gajendrani.

“Then we managed to partly build the house from funds (worth 325,000 rupees) from an international aid organization. Later we took a 50,000-rupee loan from a micro financing institute to start a poultry farm and generate an income. It was successful. We then took a 300,000 rupees in loans and completed the house. We have not received any government assistance so far,” said Rajendran.

In Thanniruttu in Mulaithivu, a couple works tirelessly under the scorching sun. Sadeshvaran Tharani and Thangarasa Sadeeshvaran swiftly produce cement blocks in their factory despite the scorching weather. The entire factory has only two tools – a metal mould and a shovel. The rest is the flat ground and the strength of these people.

“Together we make nearly 500 cement bricks,” said Sadeeshvaran. The sand, granite pellets and cement – the raw material – all has to be bought from other towns. On average they earn 3000 rupees per day or a profit of 6 rupees per brick.

“In 2009, we had to leave the village and lived in the Chettikulam Manik Farm welfare camp. When we returned nothing existed – not even the house. We received a Rs. 550,000 as a financial donation from a non-governmental organization to build a house and another Rs.25,000 to start our profession,” said Tharani, who supports their two daughters – aged 7 and 9, both born after the war. 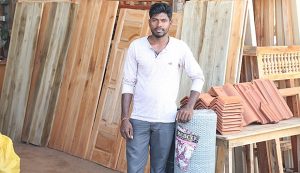 Gunabalasingham Partheevan, 27, owns K.P.S . Timber, a store close to the Puliyadi junction on Puliyankulam road. He sells timber and furniture as well as a few construction materials.

Partheevan comes from a family of renowned carpenters. The household business got devastated with the war. In the aftermath, his brother migrated to Australia using the infamous ‘boats’. Partheevan, like all other young men of the North, dreamt of migrating to seek employment. At a significant cost he almost reached Morocco but failed.

“I left home thinking there won’t be anything to do. Following my return I started this business and today I employ five people. And in the future I can provide employment for more people,” he said.