“The majority of Sri Lankans are Buddhists and there is a common belief that Buddhism must be given prominence, unfortunately, making Buddhism the state religion was an act of a group of leftists who led the compilation of Sri Lanka’s first republic constitution in 1972. When something is legalized, it is not easy to change,” said Mayilvaganam Thilagaraj, the Tamil Progressive Alliance MP for Nuwara Eliya district, in an exclusive interview with The Catamaran. 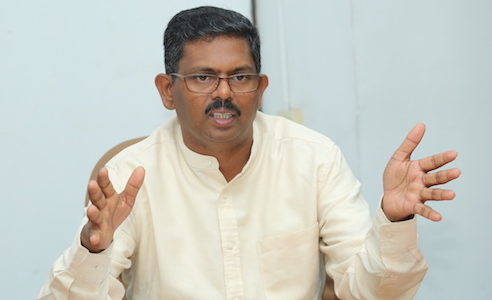 THE CATAMARAN: In your opinion, what are the root causes for religious and communal tensions that have arisen in multi-cultural Sri Lanka?

Countries like Sri Lanka used to be under colonial rule for a lengthy period. Given the fact that foreigners ruled the country for two to three centuries, native Sri Lankans lacked proper ideology in terms ruling the country. Moreover, the traditional market economy model that has existed for decades in the country helped to strengthen the country financially. This was a factor for not establishing a self-governing system. Sri Lanka only made one change in regard to the administrative procedure introduced by British colonial rulers. Unfortunately, this change brought in racial biases to the decision-making process. For instance, the citizenship rights of Indian-origin Tamils were abolished soon after the Independence, claiming they were not citizens of this country. The other example is the decision to make Sinhala the official language. These factors prevented the country developing as a secular state and the moves ultimately created imbalance among the communities.  Under such a backdrop, it is natural to have conflict when one community tries to overrule another one.

THE CATAMARAN:  There have been many representatives elected from all ethnic groups in the Parliament. Why have they failed to make any move towards change?

Many of the rulers of this country represent the majority community and naturally they are biased towards their community. Moreover, many of them believe that Sri Lanka is the only country available for the Sinhalese. This mentality has pushed them to rule the nation in a way they can maintain their influence on it. On the other hand, the major religion amongst the Sinhalese are Buddhists, which is why the government wanted Buddhism as the state religion. Therefore, it is hard to turn back something that concretely materialized at the stage of inception. Whenever someone comes forward to reform or to revise, the result is a constitutional crisis. Therefore, the country needs a shift in attitude to overcome this dilemma in order to create a free and just society for all of us. Failing to do it will keep the unfortunate status quo unchanged forever.

THE CATAMARAN: Do you think that a change in thinking is vital to overcome this conflict?

During elections, they call us to unite. But after the elections this attitude drastically changes. Unity is possible only if the ones in power can maintain the same attitude after consolidating power. As far as I am concerned, current President Maithiripala Sirisena could have been a person with that attitude. He was the common candidate at the last Presidential. Moreover, he promised the public he wouldn’t run for re-election. As a President who had no expectations in terms of clinging to power, he could have made the change. We lost that opportunity.  This is why I highlight the need for an attitude change.

THE CATAMARAN: In the aftermath of the Easter Sunday attacks, the government decided to bring about some ethno-cultural restrictions on Muslim community in the country. What is your opinion about it as a party to the current government?

Anyone has the right to wear clothes based on his or her preference. In the context of Sri Lanka, all ethnic communities like Sinhalese, Tamil and Muslims are keen on their traditional clothes. It is naturally unavoidable, and it must not be an issue when someone dresses reflecting their culture, norms and values.

Similarly, some Tamil politicians representing the Parliament for more than 20 years now, are not able to speak Sinhala. Vice versa among the Sinhalese. While it is important to protect language and art, it is also important to understand the cultures, art and languages of other communities. This should be inculcated among all. Failure to do so will not bring a solution to any problem.

THE CATAMARAN: Some people, particularly those who claimed to be Buddhist religious leaders, have extremist opinions. What is your opinion on this?

Since the majority of the people of the country are Buddhists, the government believes acting against them will lead them to consequences and loss of votes. This means the country under the hold of the Buddhists. I can give you an example. There was a proposal to convert the parliament to a constitutional council to propose constitutional reforms. The interim report was to be sent by the President to the Mahanayakas for their consent. This clearly shows the importance given to Buddhism. It does not mean that Buddhism always accepts a pluralistic society.

THE CATAMARAN: What are your thoughts on the strong demand to recognize the estate Tamils as a national ethnicity?

There is a reason why estate Tamils were not recognized as a national ethnicity of this country, it is because of their unique history. There was a long history of struggle by them to make the authorities accept them as citizens of this country. The government did nothing for them for 40 years after the Independence. Even though this community had fair claim to their rights, they lacked a proper vision; remain here or to return to India. The government was all for repatriating them to India. That was what we call the “Srima-Sasthri Agreement”. Next, the rulers of this country granted the estate Tamils the right to vote but not citizenship. This was a huge vacuum in upcountry politics. It was the biggest mistake in the last 40 years of their 80 years of politics. Many people have settled in Western nations and they have obtained citizenship rights in those countries. They remain citizens of those countries. Likewise, there are lots of Indians who have been recognized as citizens in Malaysia. Therefore, there is an immediate need to recognize them and grant citizenship. Many attempts in the past failed. Now, there is a proposal to include this identity into the new constitution of the country. We too have proposed the same, but unsure whether the new constitution will be introduced. Therefore, I filed a personal bill before the parliament to recognize them as estate Tamils. It is registered, so there is a chance for debating it in future. Estate Tamil is an identity. Moreover, we are working to bring the issue to the national politics.